Young people are particularly vulnerable to sexual harassment when they start out in their first jobs, because they either aren’t aware of their workplace rights, or don’t have the courage to speak up when something isn’t right, according to industrial relations experts.

Miles Heffernan, Litigation Director at Sexual Harassment Claims, said he is currently representing a 15 year-old worker who had suffered shocking sexual harassment by his boss.

“This young kid is just starting out in his work life, and what he has been subjected to is quite simply appalling,” he said.

Mr Heffernan said he cannot provide any further details as the case is still to be heard by the Anti-Discrimination Commission, but says he will reveal what was involved in the sexual harassment when he is legally able to, but he did want to assure victims that there is help available.

“Any worker, particularly young workers should not have to put with this sort of unlawful conduct, and there are professionals around who know how take these people on, and get justice for victims,” he said. The new case for Sexual Harassment Claims comes as McDonald’s in the US is coming under renewed fire with a national campaign against sexual harassment which protesters say is rampant across its stores.

“Sexual harassment is never okay, but in the past, if the perpetrator was an executive or a manager, allegations were either swept under the carpet, or the person making the complaint was moved on, or quietly paid out,” Mr Heffernan said.

“I think what we are seeing here is that workers are finally standing up and saying we are not going to put up with this unlawful behaviour anymore, and certainly some of these mega companies like McDonald’s and Google are now on notice.”

Recently, 19 year-old Brittany Hoyos wrote an opinion piece for The Guardian describing her experience of sexual harassment when she got her first job working at a Maccas store in Tucson, Arizona – which was advertised at the time as “America’s best first job”.

She begins by describing how tough like was juggling school work, cheer leading, and then working the night shift:

“He took opportunities to unnecessarily touch me or brush up against me. He would often text me inappropriate messages like how I looked good in my jeans.  I tried to convince myself that this was just how things worked in the fast food industry and that I needed to stay quiet if I wanted to keep my job.

“When our family car was repossessed, I had no way to get home, so when the manager offered me rides home, I accepted.  One night, he tried to kiss me, but I turned him down.  I kept this information from my parents because I was embarrassed and felt like I was at fault for his behaviour.

After I rejected that kiss, he and other coworkers began calling me terrible names at work like “whore”, “ho”, and “homewrecker”.  I didn’t know who to go to because not only did our managers witness what was going on, some were taking part in it.”

When Britney made a formal complaint to management, she was told to stop bringing up the past, and then her shifts were cut, she was disciplined for minor mistakes, and eventually fired.

>>  To read Brittany’s full story in The Guardian, click here. 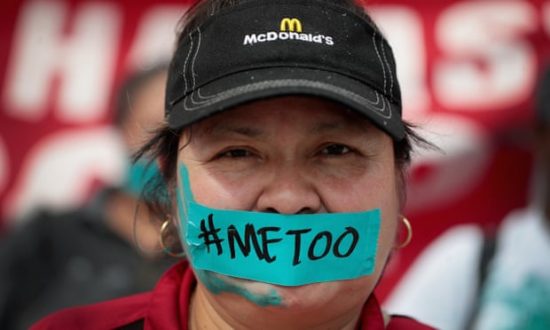 Experience all too common

Mr Heffernan said Brittany’s experience is unfortunately all too common for young workers.

“This sort of appalling conduct has gone on for years, and people have got away with it, but thanks to the rise of the #MeToo movement, finally I think we are starting to see things slowly change,” he said.

“More young women, and men, are coming forward and making complaints and saying we are not going to put up with this any more.

“If Brittany had worked here in Australia, and we took on her case, McDonald’s would have been writing her a very big cheque, not only for the appalling and unlawful sexual harassment, but also for effectively firing her when she made a formal complaint to senior management.

“My message to young workers is simple – you do not have to put up with this sort of behaviour, and if you are, you should know there is help available.”

Sexual Harassment Claims wins $20,000 for bartender slapped on the bum

A bartender at a popular Brisbane nightspot has negotiated $20,000 compensation after twice being slapped…

A cafe worker has been awarded $30,000 compensation after being sexually harassed by a head…