Female students at a Catholic high school have staged a protest after a teacher said girls were responsible for sexual harassment from men and boys, because of the way they dress.

Earlier this week, about 40 school girls from the Divine Child High School in Michigan wore paper targets on their uniforms to show that they felt “targeted”.

They also put up posters around the school which read:

“Instead of publicly shaming girls for dressing how they want, teach men not to over sexualize women’s bodies”

According to one parent, teachers threatened the girls with detention unless they stopped the protest, and took the targets off their backs and removed the posters – a claim the school denies. The offensive and outrageous comments were made to the students by a campus life administrator during a presentation dealing with sexual harassment and rape and were secretly recorded.

He told the school girls:

“If you dress provocatively and leave absolutely nothing to the imagination, younger girls look and go, ‘oh my gosh, she’s got plenty of boys around her’.”

The administrator went on to say that such clothing was “contributing to the boy’s and men’s bad behaviour” and that all the blame is on them: Divine Child High School cheerleaders – who are taught that sexual harassment is their own fault because of the way they dress.

Social justice advocate Miles Heffernan, from Sexual Harassment Claims, who has helped dozens of victims of sexual harassment negotiate substantial compensation payouts, said he was appalled by the teacher’s comments.

“It’s one of the oldest tricks in the book when it comes to sexual harassment and sexual assault – blame the victim,” he said.

“What an utter disgrace this man is to have made such ignorant and offensive comments, but then again, the Catholics have a long sordid history of not knowing how to manage sexually inappropriate behaviour.” 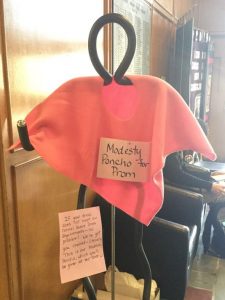 Last year, the Divine Child High School hit the headlines after it handed out ‘modesty ponchos’ to girls who wore dresses the school considered were too revealing.

“They clearly have lots of hang ups about sex and sexuality, and that is never healthy,” Mr Heffernan said.

“We have seen the tragic results of sexual repression within the Catholic Church, yet to this day, they still seem obsessed with sex and sin and shame and guilt.

“At this particular school, it involved making girls cover up their bodies at last year’s prom, and now it’s a teacher telling them that they are responsible for the inappropriate sexual behaviour of boys and men – it’s warped thinking and, quite frankly, disturbing.

“Here in Australia the law says that anyone who is 16 years-old and over can commit sexual harassment.

“No one should have to put up with that sort of unlawful and offensive conduct, whether they are a worker in an office or building site, or a student at school or university,” Mr Heffernan said.

If you have experienced sexual harassment, bullying or sex discrimination, you may be entitled to compensation.