A Qantas engineer sacked for slapping a flight attendant on the bottom has lost his unfair dismissal claim.

In addition, he made a series of creepy comments and even claimed to have “arranged” a mechanical issue so he could ask her out.

55 year-old Luke Sikalias worked for Qantas as an aircraft engineer for 37 years, before his dismissal in March 2019.

The flight attendant told the Fair Work Commission that Sikalias made a number of creepy comments to her.

The engineer made the comments in May 2018 on board a flight from Melbourne to Sydney before the cabin door closed.

He told the flight attendant that he “likes blondes”, and asked if she was single.

After a mechanical issue later forced Sikalias to return to the aircraft, he said “I arranged this so I could ask you out”.

In a separate incident in November 2018, Sikalias “slapped [the attendant] on her left buttock with an open hand and forcefully” – then telling her he meant to only touch her back.

He described the airline’s decision to terminate his employment as harsh and unfair.

He told the commission the decision has forced him to move back in with his parents and prevented him providing for his two school-aged children.

Commission says conduct ‘is not on’

Further, she said that “a modicum of common sense should tell one that the conduct… ‘is not on’.” 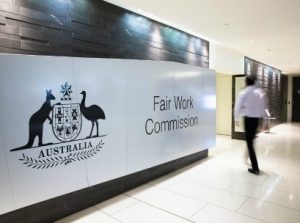 No excuse for sexual harassment

“Everyone has a right to feel safe when they come to work,” he said.

“Creepy comments and any form of unwelcome physical contact will always leave a worker in real trouble when it comes to their employment.”

For help and advice with sexual harassment, please call our team on

A former Hertz reservations agent has launched legal action in the Federal Court, claiming she…

Flight attendant in ‘a flood of tears’ over passenger sexual harassment

A flight attendant wants her employer to sue an obese passenger for sexual harassment, after…