More members of the legal profession are speaking out about sexual harassment as a result of the Dyson Heydon scandal.

For example, one woman has written about her disturbing experience starting out as a judge’s associate.

Many believe the Heydon revelations are the beginning of a reckoning for the legal profession when it comes to sexual harassment.

The writer says she had been a bright 23 year-old law graduate keen to gain professional experience in the industry.

She considered herself lucky when she won a coveted judge’s associate role after finishing university.

However, she soon discovered the judge expected more than just a strictly professional relationship.

She writes in The Sydney Morning Herald:

“My responsibilities included making him lunch during the working week, having dinner with him and accompanying him on weekend outings.

“The social requirements were presented to me as instructions rather than invitations that I could turn down.

“It was not long before the lewd comments started.

“The judge inquired about my dating life. He commented on my outfits. He asked me if I enjoyed having a massage.

“And he talked about sex around me and told me which female barristers he considered to be “gorgeous”.

“The behaviour quickly escalated to the judge taking photographs of me without my permission, inviting me to his hotel room, instructing me to bring a bikini to his hotel and discussing travel plans in which we could save money by sleeping in the same bed.”

Take it as a compliment

The writer says she told fellow associates and other court staff about the inappropriate conduct.

One subsequently told her to “take it as a compliment”.

Eventually, she spoke to the chief justice, however, he told the young associate to confront the judge about his behaviour herself.

Despite fearing it would damage her career, she did exactly that.

“Dutifully, I confronted my judge. He denied that anything inappropriate had taken place.

“I continued in my role. The sexual harassment stopped, except for one last opportunity to take unsolicited photographs of me.

“The conduct complained of was replaced, however, by verbal put downs directed towards me in open court.

“For the remainder of the time I worked for the judge, I was consumed by fear and extreme stress.” 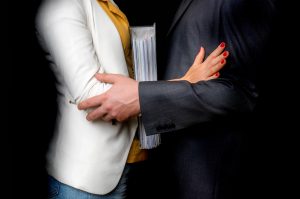 “We know that victims of sexual harassment suffer anxiety, depression and, in some cases, post traumatic stress disorder,” he said.

“Unfortunately, the legal profession has long had a blind spot when it comes to inappropriate conduct.

“Men in positions of power believe they have a right to behave this way, as if they are above the law.

“Unfortunately, I think we are only scratching the surface to what I believe is a systemic problem in the legal profession.”

‘I want to see change’

The former judge’s associate says the harassment ended her career.

“My experience caused me to be profoundly disillusioned by the legal profession and lose confidence in my abilities.

“I felt my values did not match those of my superiors and thus I would never really belong.

“I left the profession within a year.”

The writer has now reported her experience to the current chief justice, who offered to support an external investigation into her claims.

“I want my story to be known, to foster a climate in which women feel they can come forward about their experiences with the profession.

Dyson Heydon's university nickname has been revealed amid new sexual harassment allegations against him. The…

New hotline set up for lawyers to report sexual harassment