A Federal Court Justice has described actress Erin Jean Norvill as not ‘credible’ and ‘unreliable’ after she accused Oscar winning actor Geoffrey Rush of sexual misconduct.

Justice Michael Wigney made the comments in the Federal Court as he handed down his judgement in Rush’s defamation trial against Nationwide News which publishes The Daily Telegraph.

“The impression I gained about Ms Norvill was that she was a witness who was prone to exaggeration and embellishment.

I do not accept that she was an entirely credible witness, or that the evidence she gave against Mr Rush’s conduct was reliable.

Sexual harassment victims urged not to be discouraged

But social justice advocate Miles Heffernan urged victims of sexual harassment to not be discouraged by the outcome of the legal action.

“It is really hard for victims of sexual harassment to come forward and make formal complaints, because they fear for their jobs and careers, or that they won’t be believed,” he said.

“The important thing for women and men who are subjected to unwanted sexual behaviour to know is that there is help and support available, and there are things they can do to stop it from happening, without ending up on the front pages of the newspapers.” Erin Norvill was described as not credible and an unreliable witness.

Norvill was playing Claudia, the daughter of Rush’s character King Lear, in the Sydney Theatre Company’s production of King Lear.

She made a confidential complaint about Rush’s behaviour to management at the Sydney Theatre Company, the details of which were subsequently leaked to tabloid gossip hound Jonathan Moran.

He printed the allegations without Norvill’s permission or cooperation in two separate stories, but did not name the actress.

For the first, The Daily Telegraph published a front page with a photo of Rush describing him as “King Leer”. Almost all of the allegations Moran printed were based on Norvill’s complaints, which involved eight separate alleged incidents of inappropriate touching and comments – some of which occurred during rehearsals, and others during performances.

Rush allegedly “inappropriately touched” Norvill while on stage five times, and once followed her into a bathroom during a party and stood outside of her cubicle until she told him to “f— off”.

During one rehearsal, Rush was accused of hovering his hands above Norvill’s chest and “made groping gestures in the air with two cupped hands intended to simulate groping and fondling breasts”.

“He was striking, gesturing up and down my torso and groping above my breasts… and kind of raising his eyebrows, bulging his eyes, smiling, licking his lips,” Norvill told the court.

The 34 year-old actress also claimed that while she was playing dead, Rush stroked his hand across the side of her right breast and on to her hip during a preview performance.

She also claimed that on a different day, Rush had put his hand under her shirt on her lower back, and on another occasion, sent her a text message that said he thought about her “more than is socially appropriate.”

The offensive comments allegedly happened during a promotional session for the play, and another was in the form of a text message sent by Rush six months after the production had finished. 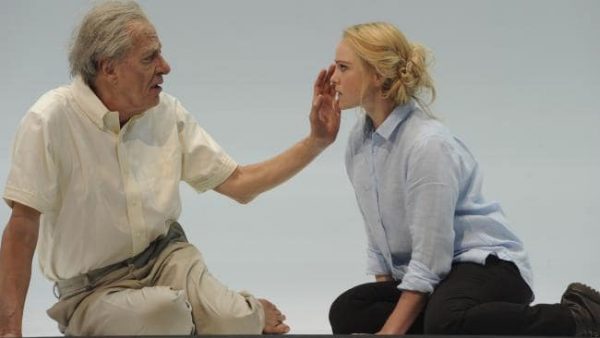 Geoffrey Rush and Erin Norvill in rehearsals for King Lear.

Justice Wigney said actress was not credible or reliable

Justice Wigney found that the allegations had not being proven on the balance of probabilities – the standard required for defamation cases – and was scathing of The Daily Telegraph.

He described Moran’s stories as “recklessly irresponsible pieces of sensationalist journalism of the very worst kind”.

He was also critical of the evidence given by Norvill.

“I was not persuaded that Ms Norvill’s evidence concerning them was credible or reliable,” Justice Wigney said.

“On Ms Norvill’s own account, the incidents were seen by, or most likely seen by, most of the cast and many of the crew who were working on the play.

“Yet Ms Norvill’s evidence about the incidents was not only uncorroborated but was contradicted by, not only the evidence of Mr Rush, but also the evidence of (director) Mr Armfield, and (actors) Ms Nevin and Ms Buday”.

Rush was immediately awarded $850,000 compensation, with further damages to be determined by the court in May.

Rush is seeking $25 million for damage to reputation and lost earnings.

Victims should always speak up

Mr Heffernan, in his role as Litigation Director at Sexual Harassment Claims, has assisted countless victims of sexual misconduct.

“It’s important to understand that the Geoffrey Rush case was about defamation and involved a fight between a big time celebrity and a trashy tabloid rag of a newspaper, and a smart arse reporter who trades in low level gossip who didn’t care about the alleged victim,” he said.

“Unfortunately, Ms Norvill was caught in the middle, and at the end of it all, she will be the biggest loser.

“But the good news is, this does not happen in most cases of sexual harassment that we deal with, and we deal with quite a few.

“If you are being subjected to this sort of unlawful conduct, reach out and get some expert advice, because you don’t have to put up with it, and you may be entitled to compensation for any suffering and distress you may have suffered.”

Mariah Carey has managed to settle a nasty legal battle with her ex-manager, which involved…

Opera star Placido Domingo has been accused of sexual harassment by nine women, with some…