A drunken passenger had to be removed from a flight after he allegedly sexually harassed a flight attendant, leaving the worker in ‘a flood of tears’ even before the flight took off.

According to other passengers on the flight, a group of men became disruptive, and following the safety demonstration, one of them got up out of his seat and approached the flight attendant and behaved inappropriately towards her.

The easyJet flight was scheduled to leave from Bristol in England to Belfast in Northern Ireland when the incident happened.

One passenger said the group of men had “definitely” been drinking before boarding the aircraft, and had been so disruptive that the pilot left the cockpit before take off to investigate where the noise was coming from.

As soon as the safety demonstration was complete, witnesses said the men again became disruptive, at which point the male passenger got up from his seat and approached the flight attendant.

“One of the men got out of his seat, when we were all supposed to have our seat belts on, and walked down the aisle towards two female members of staff,” passenger Rachel Davies, told The Sun.

“I couldn’t hear what he said to them, but one of the women said, ‘I am treating this as sexual harassment’.”

The aircraft immediately returned to the gate where police came on board and removed the troublesome passenger.

“As police escorted him off, the lady in the cabin crew was in floods of tears and was saying that she didn’t feel safe on that flight,” Ms Davies added.

After a two hour delay, the flight finally took off.

The man in the grey shirt is removed from the flight after being accused of sexual harassment.  (Picture: SWNS/Mega)

“Whether it’s disgusting comments, or bottom pinching or requests for sex, flight attendants put up with a lot,” he said.

“These men and women are there to not only look after passenger comfort, but they are also there to provide a vital safety role in the event of an emergency, and they deserve to be treated with the respect and courtesy everyone should get in their workplace.” 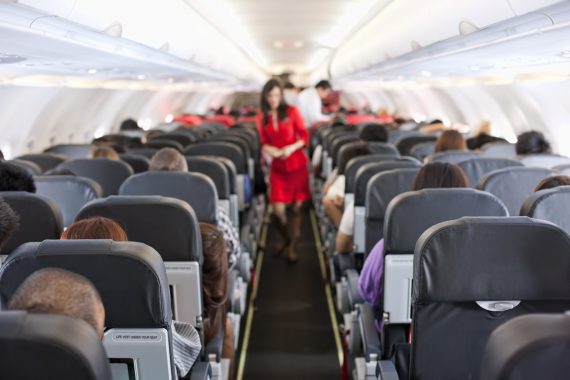 A recent shocking survey by the Transport Workers Union found that two thirds of Australian flight attendants have been sexually harassed on the job, with one worker reporting it happening every single day, and sometimes on every single flight.

Workers reported incidents including passengers exposing themselves and asking for oral sex, touching their genitalia and asking personal questions.

Others said they had been pinned down and assaulted, or had been touched on their groin or buttocks by passengers, and many had received derogatory comments about their perceived sexual orientation.

It led to the launch of the #CabinCrewToo campaign by the TWU.

Last year, former Qantas flight attendant spoke out on national television, claiming to be the victim of persistent sexual harassment at the hands of an on-board manager.

Speaking on Network Ten’s The Project, Hannah Rowlands also said that the airline industry is “rampant” with sexual harassment.

“People are scared.  I had grown ladies on the phone older than my mum hysterical going, ‘this one grabbed me by the throat and threw me against the elevator on an overnight’.

“I’ve got a list that long of women who have come to me since it happened.”

No one knows what happened to the easyJet passenger

The welfare of the easyJet flight attendant targeted by the passenger is not known – nor is the fate of the man involved.

No one can confirm if he was arrested or not.

No one knows if the man who allegedly sexually harassed the flight attendant was arrested.  (Picture: SWNS/Mega)

Bristol Airport told The Sun that it was assisting police with their investigation, while easyJet released a statement condemning the man’s behaviour.

“Easyjet’s cabin crew are trained to assess and evaluate all situations and to act quickly and appropriately to ensure that the safety of the flight and other passengers is not compromised at any time.

“Whilst such incidents are rare we take them very seriously, do not tolerate abusive or threatening behaviour on-board.”

A flight attendant wants her employer to sue an obese passenger for sexual harassment, after…

One in four Qantas staff have been sexually harassed

One in four Qantas staff have been sexually harassed, according to a disturbing new survey…

Qantas engineer sacked for slapping flight attendant on the bottom